Black women continue to advance in a range of professions, despite systemic barriers.

Denise Streeter, PhD, CPA (BBA ’84) assistant professor of finance and international business in the School of Business, recalls being excited to go to her internship at a major New York City bank in the summer of 1982.

That excitement dampened when she arrived. She wore her hair straightened with bangs. She pulled the rest of her hair back into a single French braid down the middle of her head.

“I was told my hair was too ethnic,” Streeter says.

Her manager and internship coordinator gave her two options: go home for the day to change her hair or they would give her money to have her hair curled during her lunch break. She chose to find a salon during lunch. “She told me to come back and see her before I returned to my desk.”

Streeter, now a tenured professor, who formerly served as a chief financial officer, says she experienced many incidents driven by racism and sexism.  Stories like Streeter’s underscore the situations Black women often face as both employees and entrepreneurs. Black women earn 63 cents for every dollar earned by white men, Streeter says, even as Black women continue to make never-seen-before strides. “We see a Black woman, a Howard graduate, as vice president of the U.S. We’re closer to the White House than we’ve ever been,” says Streeter, who is interim accounting department chair. “We’re making lots of progress.”

Landing jobs is another obstacle. Public sector jobs, often considered more open to hiring and promoting Black women, have also been cited for disparities. Black women are 58% less likely to be hired than white men, according to a 2021 report by the recruiting website GovernmentJobs.com. And even after they are hired, issues persist after they get the job. Black women experience more workplace challenges such as being interrupted while speaking or having their judgment questions, according to a 2021 report by Lean In.

less likely for Black women to be hired than white men.

In fact, Streeter experienced several more negative incidents that she attributes to her race and gender. Streeter, a former chief financial officer, tells a story of going to lunch with her team, a group of white males.

One of her team members told a friend who stopped by, “I’m out with my boss and my team.” The friend looked at the other white men to see which one was the boss. The employee said, “no, she’s my boss.” The friend seemed shocked when he said “You work for her?” The employee quit weeks later. “I had to believe it was because of peer pressure from his friend,” Streeter says.

Another time, she sat at the secretary’s desk looking for something. A white man who reported to her said, “Oh, I see they finally put you in your place.”

He said he was joking when Streeter questioned him, but she had felt that attitude from him before. She escalated the incident to her boss. “I had a supportive male boss who agreed with me and we let that person go.” 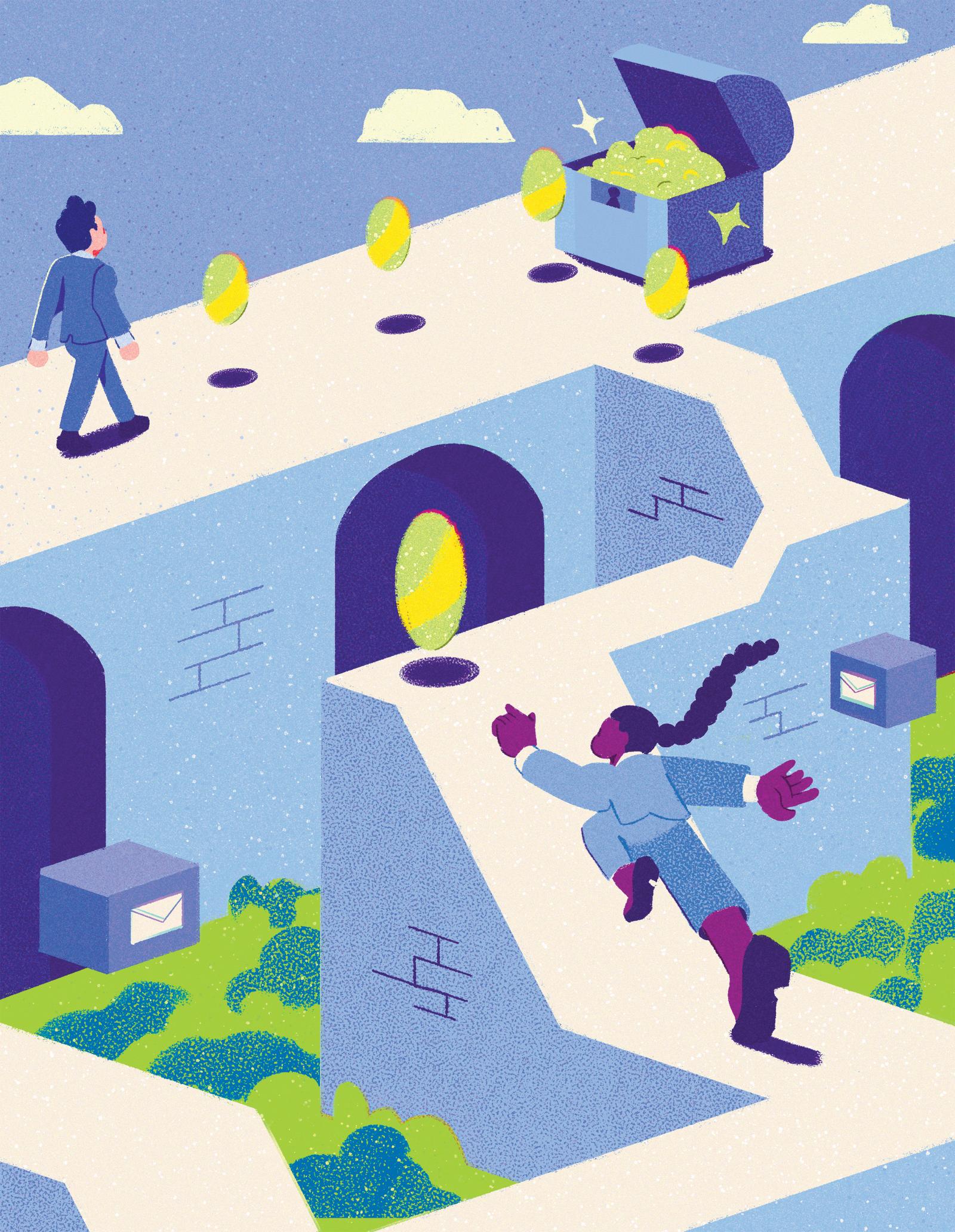 Doubting Black women and questioning their work adds to the stress they experience on the job. This can further impede their career progress, experts say.

“We can’t be afraid to stand up for ourselves. Be bold, not bashful,” says Streeter, who teaches her students how to succeed in corporate environments. She adds, “One has to know that you are good at what you do and you belong there to do it. We are not seeking permission to be in corporate spaces. Don't look around for the barriers, just focus on achieving your goals and helping others to do the same. At an HBCU, we not only teach you the content, we teach you how to navigate and how to express that you understand the content,” Streeter says.

Cyntoni Miller, who attended Howard in 2008, first truly understood the disparities Black women face when she worked in California as a recruiter for universities. Miller earned very little at the time, $9 per hour and sold plasma when she needed extra money. She found herself surrounded by Black women in similar circumstances—not quite making it.

The realization was underscored when Miller says she interviewed a well-qualified Black woman for a position that paid $112,000.

Miller, who was raised in Compton, California by her grandmother while in foster care, says she planned to offer the job to this woman who held a master’s degree. Her boss, however, for the first time didn’t want to go with Miller’s choice. He wanted to offer the job to another candidate, who did not have a master’s degree, because their resume looked better, Miller says.

We are not seeking permission to be in corporate spaces.”

With the Black applicant’s permission, Miller revamped her resume, landing the woman the job. That experience reinforced for Miller that even when Black women have better qualifications, they still face a multitude of road blocks.

This incident made Miller grow more frustrated with lower salaries offered to Black women, comments about how they speak and even scrutiny about how Black women wear their hair. Miller began sharing resume, interview and career advice online to help Black people circumvent the discrimination. This led to her building a Facebook group that now includes more than 68,000 members, “Black On The Job with AdminCyn” and a career coaching service that exclusively serves Black people to eradicate the wage gap.

Forging Her Own Path

Lillian Lincoln Lambert (BA ’66), the first Black woman to earn an MBA at Harvard University, credits her Howard education with helping her overcome obstacles. “I got a great foundation at Howard — just as good as I received at Harvard,” she says.

In 1962, Lambert didn’t come to Howard directly out of high school because she had other plans. She moved from her family’s farm in Virginia to New York with hope of being a secretary. “I was an 18-year-old know-it-all,” says Lambert, author of the book, “The Road to Someplace Better: From the Segregated South to Harvard Business School and Beyond.”

“I thought getting a secretary job would be easy,” Lambert recalls, who instead worked as a typist at Macy’s in the comparison shopping department and cleaned houses.

You don’t want to be considered an angry Black woman or a pushover.”

After finishing school in 1976 with a few thousand dollars of her own money, Lambert started Centennial One – which eventually became a $20 million industrial cleaning service with federal contracts and 1,200 employees in six states.

Lambert sometimes found that being a Black woman worked in her favor. She connected better with her employees. In her industry, most of the workers were women, while the vast majority of owners were men.

Finding the right balance left Lambert often feeling like she was “walking a tight rope.” “You don’t want to be considered an angry Black woman or a pushover,” she says.

The Inequality in “Black Girl Magic”

Lambert urges Black women to find creative solutions, use their networks and ask for support, which is how Lambert gained additional funding for her business.

“Getting a bank to loan you money was basically unheard of for a Black woman-owned business,” says Lambert. Her method? She invited a banker she knew to lunch, told him about her business and asked for a line of credit. It worked.

Dawuni’s solution: “People must stop expecting Black women to do ‘Black Girl magic.’ People are used to us achieving and making impact with the little we are given,” she says.

This leads to high expectations while Black women continue to receive lower pay. “Working in service industries, Black women are underpaid and overworked with less benefits and limited opportunities for upward mobility,” says Dawuni, whose center will create more programs to build connections between current students and alumni to close some of the gaps.

In response to uprisings sparked by police killings and racial injustice in recent years, more companies emphasized diversity, equity and inclusion programs. However, these initiatives fall short if Black women still earn significantly less than their counterparts, she points out.

“These programs should not be yet another effort at window dressing,” Dawuni says. “Create sustainable opportunities and safe spaces that allow Black women to thrive. Organizations should be intentional and committed to creating institutional mechanisms that don’t cause us to do magic with nothing.”

Stats About Black Women in the Workforce

Black women made up 53% of the Black labor force in 2018 (source: U.S. Bureau of Labor Statistics)

For every 100 men promoted to manager, only 58 Black women were promoted. (source: McKinsey & Company)