Putting Together a Dream

Puzzlemaker Matthew Goins aims to inspire Black children, one piece at a time.

Matthew Goins (BBA ’02, MA ’06, MBA ’09) is changing the conversation of what it means for families of color to raise the next generation of cultured, intelligent, and empowered youth who can achieve anything they set out to do. And he’s using jigsaw puzzles to make it happen.

The founder of Puzzle Huddle and his wife, Marnel Niles Goins (MA ’03, PhD ’07), noticed a lack of diversity and inspirational career images represented among the characters of children’s products. “I wanted to expose my kids to different career images to inspire them,” he says.

The inspiration behind Puzzle Huddle is rooted in Goins’ childhood experiences, where STEM and the arts were seeds that his mother planted. “I only got to where I am today because I was raised by an educator,” he says. He and his siblings were hands-on in arts and crafts; they learned pottery and could make bowls, plates, and cups. He also wanted his product to connect families through an activity that initiates discussion around empowering children. 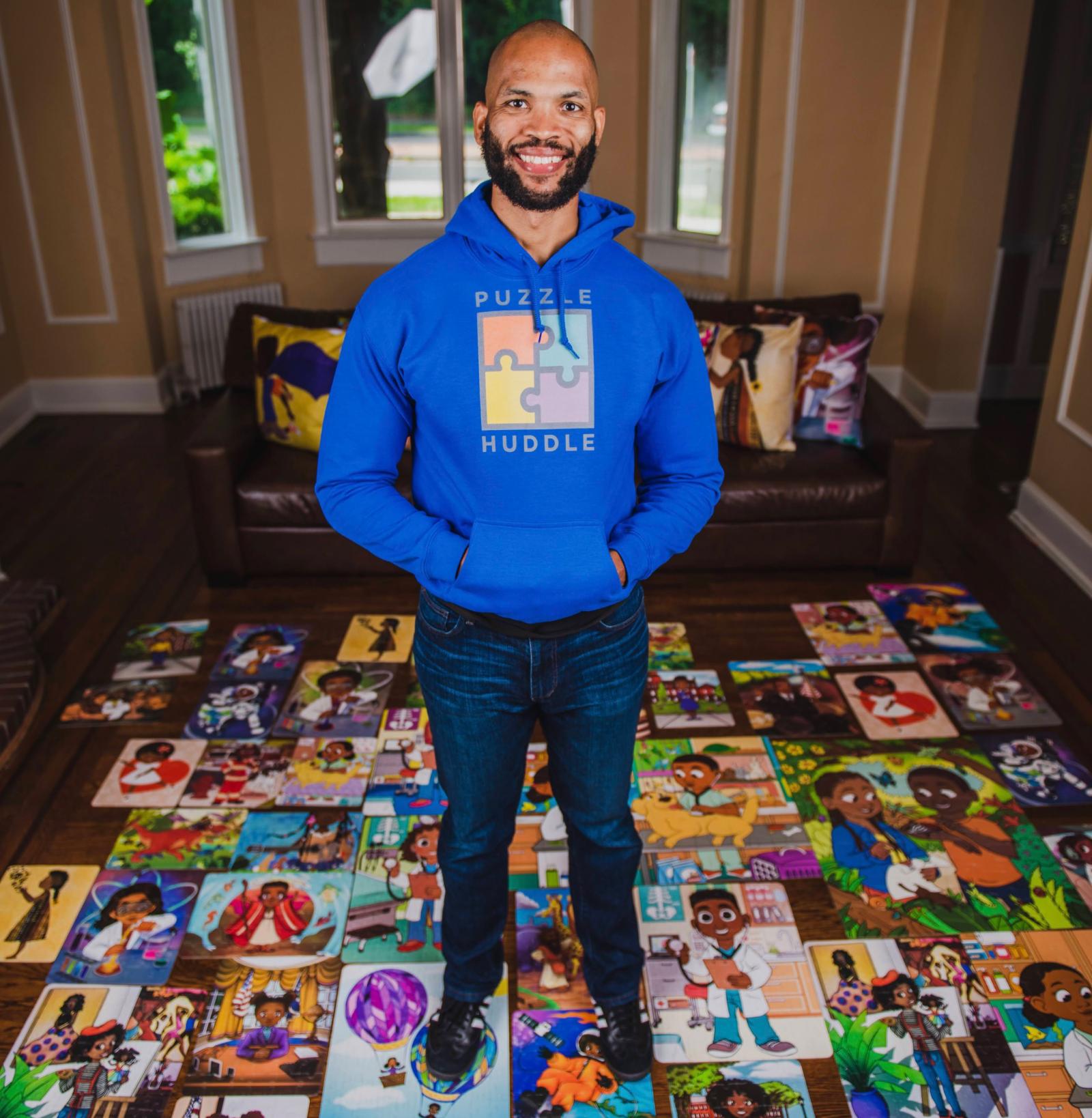 Diversity is a key component of his puzzle characters. Among parents, educators, and children, that has sparked discussions that inspire kids to pursue the careers they see depicted in the puzzles.

“When you go to Howard, just by the [proximity] of your network, you know a lot of engineers, doctors, lawyers, and scientists, so I started with career images,” he says.

His puzzles range in number of pieces up to 200 and depict various occupations, including scientist, doctor, U.S. president, firefighter, artist, dancer, vet, astronaut, and chef. Howard alumni will instantly recognize campus backgrounds on some puzzles. His product line has expanded to include coloring pages, throw pillows and blankets, T-shirts, and paintings.

Often kids are overexposed to artists and athletes, but we want to expose them to other areas, so their career isn’t limited to sports and entertainment.”

Goins says the Howard community has hugely supported him from the beginning. “I’m not from a venture capital background, or an entrepreneurial startup accelerator – I’m just a dad that created products,” he says. The Howard community was quick to support him, and his first 10 orders were mostly Howard people. He has since partnered with the Showtime Marching Band and the Flashy Flags to create custom puzzles and T-shirts as well. “If anyone from Howard asks me to do anything for them, the answer is usually yes.”

Recently, Goins was presented with a compelling opportunity to team up with Netflix as a product partner to create “The Ada Twist, Scientist” puzzle collection, which feature characters from the New York Times best-selling book series and Netflix animation series. “Often kids are overexposed to artists and athletes, but we want to expose them to other areas, so their career isn’t limited to sports and entertainment,” he notes.

This series has been widely successful, garnering much attention from other major companies that wish to partner with Goins in the future.

But it’s the feedback he gets from parents that he sees as the main indicator of success. “Every time I see a young person with our products, it’s rewarding. We receive stories from parents where a child will open the product and the child will think that it’s them,” he says. “For a kid to believe that they are the character in the puzzle without anyone suggesting this to them, this is major. This is bigger than any sales number.”